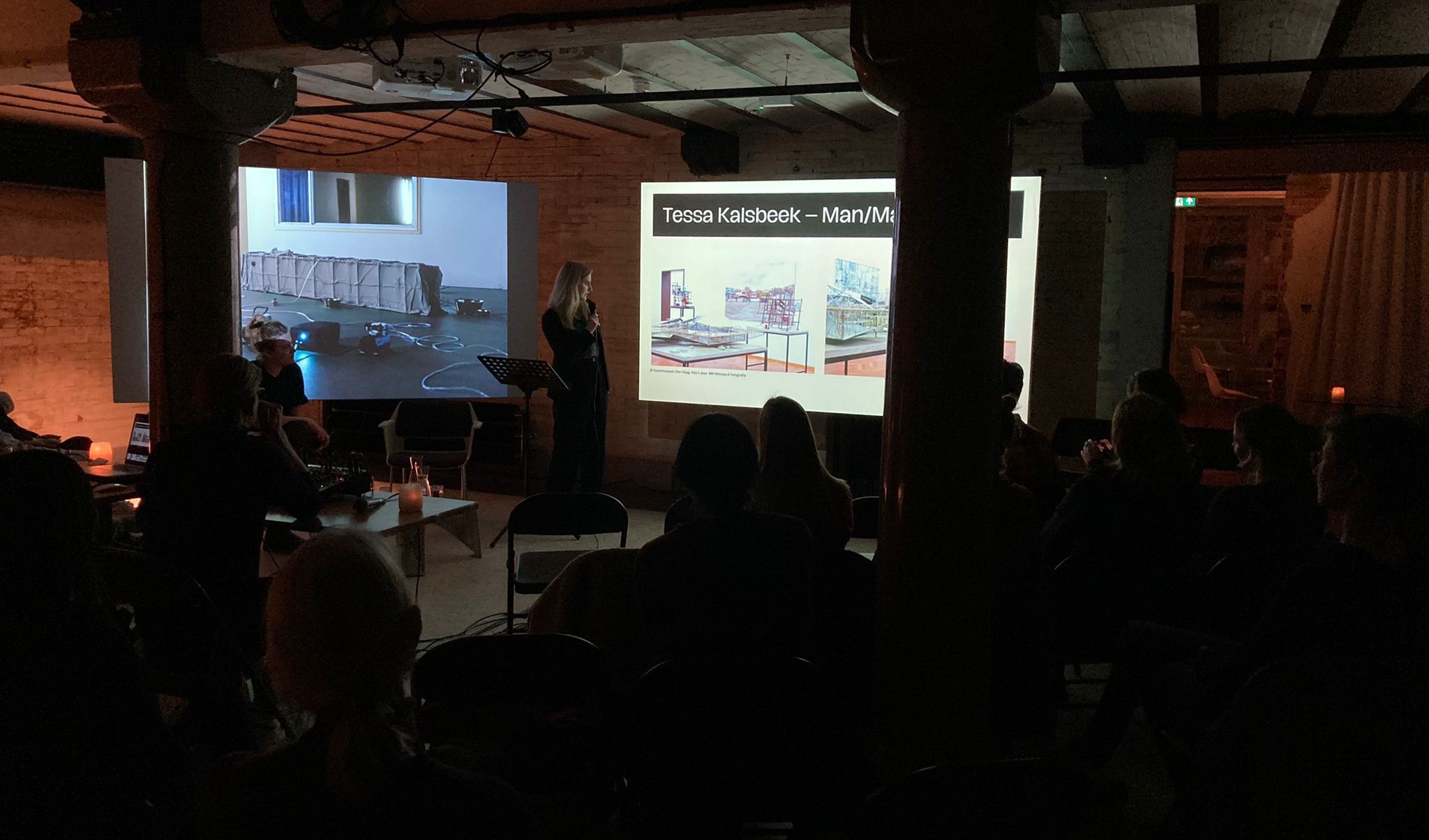 “The boundaries between science, technology and art will continue to blur.”[1]

That is what Constant Nieuwenhuys (1920-2005) wrote about sixty years ago. It was the beginning of his long-standing project New Babylon: a future vision for a new city, a new society and a new reality.[2] Constant saw the merging of different disciplines as the result of increasing automation, which formed the basis of New Babylon. The machine would take over the diligent work of man and give him infinite free time: time for communication, creation and play. Homo ludens was born.[3]

New Babylon means boundlessness in the broadest sense of the word. A city where utility/usefulness no longer dominates human action ("Technology can free us from the tyranny of work, release us from the duty 'to earn our daily bread by sweat"[4]) and freedom is within reach (“technique can conquer distance and time”[5]), creates endless possibilities. A city made up of countless sectors (traffic independent of buildings), where machines run factories far away from the New Babylonians and in which people collectively achieve artistic creation in large socio-spaces: that is how Constant saw the future. A world with minimal frameworks; the realization of this was in the hands of the coming generations.

Fast-forward to 2022. Technology has become an integral part of our daily lives: the products we use are made by machines, we communicate with the help of machines, consume media via machines and sometimes even become one with (medical) machines. Is this New Babylon then? There is still no question of an era without work, with complete freedom of play. So is this time the forerunner of Constant's intended utopian world? In the middle of the last century, people predicted a mechanized world with a more open, optimistic view. Nowadays, we are increasingly aware of the flip side of these unlimited developments. Think of the major influence that social media have on our mental health, or how (no) access to technology increases inequality between people. The question is whether technology/automation brings us more freedom, or more captivity - and whether that is a positive or negative fact.

Utopia or dystopia. Infinite progress or slowing down developments. Progress or decline. It is these kinds of contradictions and the interplay between 'good' and 'evil' (and everything in between) that surface in the work of the three artists in Bridging Borders. Isabella Fürnkäs (1988), Janina Frye (1987) and Tobias Groot (1994) create work based on their own interests, experiences and methods, but have one common denominator: the relationship between man and machine today. In their work they question this relationship, praise the endless possibilities of automation and at the same time make critical comments about this continuous progress. Fürnkäs, Frye and Groot play with themes such as creativity, escapism, relationship building, sexuality, hierarchy and dependence in a world in which man and machine can no longer ignore each other. The question of whether it is men who controls the machine, or the machine who controls men, is ubiquitous in Bridging Borders.

Isabella Furnkäs | In Ekklesia (2015) | The dance between man and machine

Duality is central to Isabella Fürnkäs' work: two different worlds, that of man and the machine, come together. In Ekklesia (2018) is a video installation in which images of machines at a technology fair filmed by Fürnkäs and images of dancing people at a rave flash through each other. At first, those worlds may not seem to have much in common, until the repetitive movements of the robotic arms merge into those of the ravers. Man and machine are connected in an endless dance: the machines dance like people, the people look like machines. Both the robots and the ravers are slaves to the rhythm.

Since industrialization, the automation of society continues to increase. In Ekklesia shows from an abstract point of view how many similarities and connections there are between man and machine. On the one hand this causes a somewhat dystopian feeling, on the other hand as a spectator you also experience the enormous energy that gets released. Fürnkäs plays with the idea of ​​utility by focusing on continuous movement. Machines produce machines that will later produce machines. Ravers dance together with other ravers with identical movements to the rhythm of the music. Man and machine meet in the same state of unconsciousness, of emptiness. Could this be the reality of New Babylon? Machines in the infinite dance of labour, people in an infinite dance with each other.

Our current world is both utopian and dystopian: production makes everything possible, but at the same time destroys a lot. The climate crisis shows us that we cannot do, cannot make and cannot want more and more forever; capitalism creates great differences between people. In Ekklesia responds to this. It is the longing for a certain state of blindness, because it is too difficult to face reality. By moving, dancing and playing we can escape from everything around us for a while. Collective dancing in the club is a silent, bloodless protest; just like Provo danced nonviolently and playfully around the Lieverdje in Amsterdam in the 1960s.[6]

Janina Frye constantly bridges the boundaries between man and object in her work. Blue Morpho (2021) resembles an Ancient Greek torso, but with mutations of flesh and bones. The resemblance to a scoliosis corset makes it immediately apparent that Frye has a great interest in medical objects, which, according to her, literally confuse the hard boundary between man and object. The straps and buckles give an uncanny feeling, because machine and body seem to be one through close cooperation. In a sense, Janina Frye is diametrically opposed to Constant: whereas, according to him, a hierarchy between man and machine is necessary for a better world, she consciously allows these actors to merge in order to better understand the world.

In Chimera (2022), a skin of latex covers several objects that are vacuumed and become filled with air at intervals: the work seems to be breathing. Non-living material uses a machine to acquire properties of a living human being. With this Frye focuses on what it means to be alive: the absence of human beings makes human beings present. In her most recent work, she has applied the broad concept of scaffolding (a scaffold, according to Frye, provides support and shapes material, behavior and environment) and thus refers to architecture and urban development projects such as New Babylon. However, scaffolding is also used in medical processes such as tissue technology; an example of how technological developments are creating more and more possibilities in our world.

However, the question is how far should we go as humanity? We can do anything, but do we really want to? Frye sees a similar problem in both our own time (artificial intelligence) and in New Babylon (machine as 'slave' of man): that of transparency. Who operates the machine, who determines what the machine does and whose agenda is carried out? Janina Frye emphasizes that we already live in an era where machine and man are inextricably linked. She shows both the possibilities and limitations of this. We must constantly reconsider our position as a human being of flesh and blood in an increasingly automated world.

Digital intimacy is the central theme in Tobias Groot's work. In I Try To Be There For You (2020), virtual bodies in the digital world seek physical contact with each other. People float through each other in a soft, sensual way, but there is no real touching. With this, Groot is responding to the great lack of physical contact - the 'skin hunger' - during lockdown. At the same time, the work addresses a larger phenomenon: the way technological developments have changed human communication and relationship building over the years.

Tobias Groot sees the internet as an important place for connection, but also for identity formation and the discovery of someone's sexuality. The online world offers a safe place to experiment and research; especially for queer people who do not feel the possibility to do so, or at least less, in their own environment. The machine literally stands between people and facilitates interpersonal relationships, with the result that sexuality and technology become inextricably linked.

While man and machine nowadays work closely together to establish communication and (love) relationships, the machine in Constant's New Babylon influenced people from a distance. Automation frees the homo faber (working person) from labour and material worries, enabling man to live as homo ludens. Love also took on a new form: whereas sexuality previously took on a utilitarian form, namely taking care of offspring, sexuality in New Babylon is exclusively playful. An emotional and physical game, in which the act and interaction themselves become more important than the result.[7] The way machines form interpersonal relationships is completely different in our world than in New Babylon, but the result is the same: love is not only useful, but offers the freedom to play (physical or online).[8]

As an artist, Groot is always looking for collaboration with machines by using CGI (computer-generated imagery) and artificial intelligence. This produces interesting tensions: the artist versus the machine, craft versus mass production, and the personal versus the impersonal. Groot starts from his own experience and then adjusts the machine to his will, in order to arrive at a result together. The artist thus balances on the fine line between the world of homo faber and homo ludens.

Bridging Borders brings together three artists who each look at the relationship between man and machine from their own perspective. Do we have to take advantage of every technological opportunity and push the boundaries endlessly? Should man and machine merge more or less? In dialogue with each other we may come to a consensus about what New Babylon should look like in 2022.

[3] The playing person. This term is used to denote the inhabitants of New Babylon, who can devote all their time to play and creation because they need no longer work. Constant adopted this term for his New Babylonians after reading the 1938 book Homo Ludens by historian Johan Huizinga.

[6] Provo was an Amsterdam protest group (1965-1967), for whom New Babylon was an important source of inspiration for its ideal future city 'New Amsterdam'. Provo's critique of society and ideas are in line with New Babylon: among other things, they wanted to liberate the street from the car and saw the street as an essential socio-space. Constant also wrote several contributions for the magazine Provo.