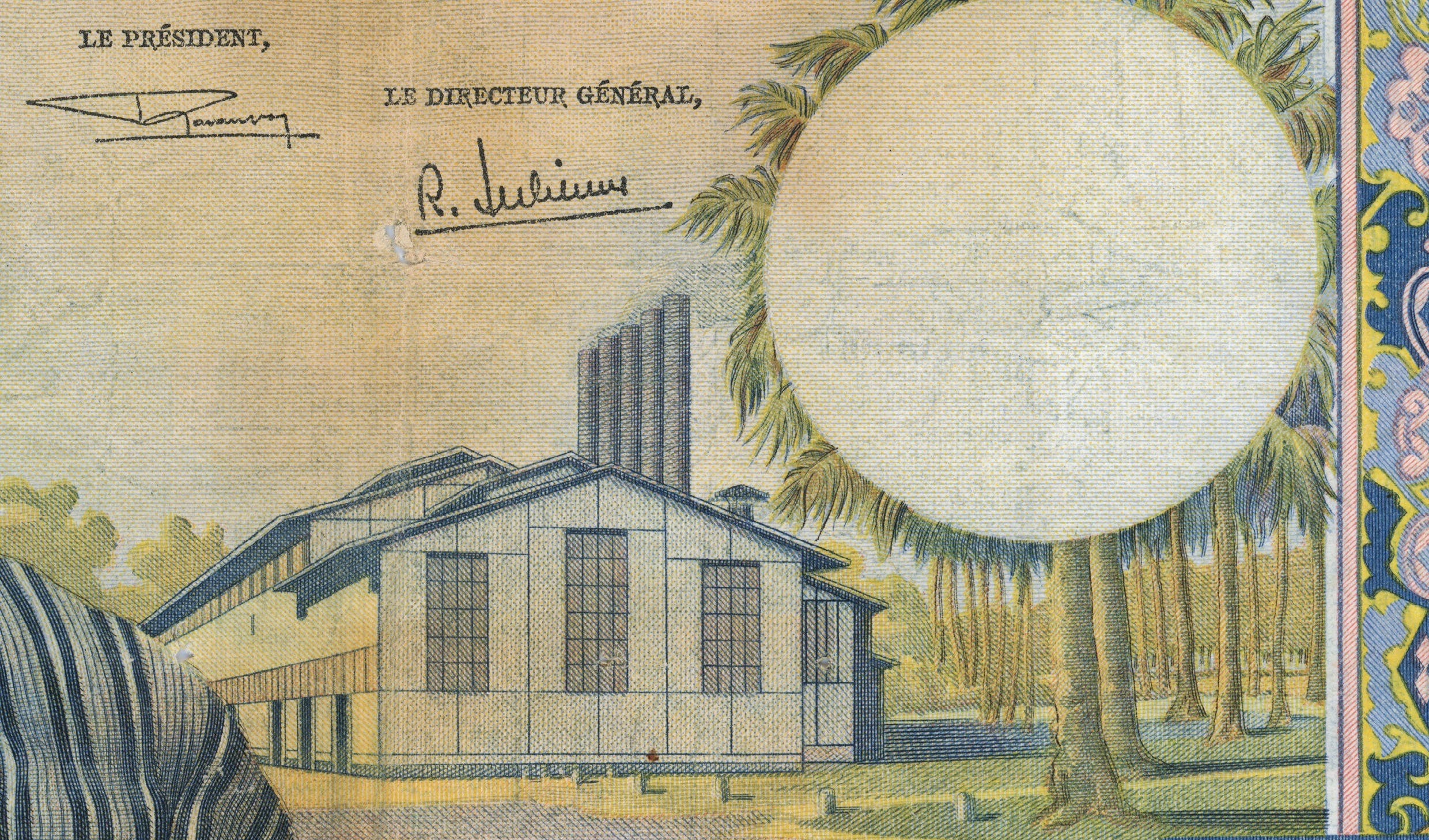 Due to the current lockdown Nucleus of Capital mainly takes place online. Keep an eye on our social media and website for the programme! You can watch a film by Koen Kievits on this page, in which artistic director from POST Youri Appelo gives an introduction and Nina Støttrup Larsen and Anna Bitkina talk about their show. Feel free to read the exhibition leaflet here and check its appendix here, both designed by Studio Questionmark.

Nucleus of Capital
In Search for a New Numismatic Practice

Nina Støttrup Larsen’s exhibition Nucleus of Capital is part of an ongoing artistic investigation of European power structures and racial capitalism. Støttrup Larsen utilises the concept of Eurafrica and examines the history of European integration, closely tied to legacies of colonialism. The advocates of Eurafrica, a concept that was developed in the early 1920s, sought for more effective and profitable management of the colonies and resources from the African continent. This ‘political project and geopolitical constellation’ played a crucial role in the early development of the European Union. Eurafrica gained its actual political impact after World War II but during the process of decolonization this concept was largely forgotten and sanitised out of the EU’s vocabulary to fit a contemporary discourse.

To examine the evidence of the so-called post-colonial present in the EU, Støttrup Larsen researches the CFA Franc (in 1945 incorporated as Franc of the French Colonies in Africa) - the official currency issued in 14 states of West and Central Africa, the former colonies of France. While other European countries ended their monetary control when the colonies were granted  independence in the 1950s and early 1960s, France has continued to manage and govern monetary processes in the region until today. Visually, linguistically and historically, this colonial continuum remains obscured in Europe since the 1960s, which results in the fact that this current major sub-currency of the Euro is little known about, at least in Europe. The exhibition brings to light and bolsters public discourse around these camouflaged processes by which the French and EU economy undermined the sovereignty of the 14 states in the CFA zone.

Nucleus of Capital demonstrates the extended decolonizing possibilities of numismatic practice by focusing on the banknote as an object, as a witness and as a central piece of evidence for the Eurafrican motivation in contemporary European infrastructures. Containing a wealth of information engraved into the surface of the paper with icons and motifs that hold many political and historical features, the banknotes are a visual nucleus in an otherwise shielded ‘invisible’ economic power construct.

Study Sites
The process of studying the history and current state of Franс CFA lead Nina Støttrup Larsen through a variety of materials, visual research, economic reports, consults with numismatic experts, site visits around The Banque de France and its money printing facilities, in addition to talks with activists and economists from Senegal, Togo, France, and within the EU. During the last four years she has composed an impressive compilation of archival documents and case studies, different formats of prints, and a rich set of research materials including images, maps and diagrams. At the exhibition, they are distributed throughout the space and form clustered sites of knowledge and references.

There is a large black and white paper print - an enlarged page from the ‘Atlas of Europe’ of 1942 with a cartographic representation of Eurafrica. The long printed diagram on the table includes quotes by various African leaders and politicians who wanted to exit the CFA monetary zone but were punished by the system. The diagram also contains the opinions of economists stressing the disadvantages of the ‘peg’ of the CFA Franc to the Euro. Such a relation works in favor of the European economy, which receives goods, services and natural resources at a significantly lower price. In addition, a chart presents the administrative domination of the EU banking system within the macroeconomic infrustructures of the banking system and monetary unions in Central and West Africa.

The lighboxes on display show scanned and radiographed banknotes. For example, a watermark of Marianne, a symbol of ‘The French Republic’, is incorporated into the CFA Franc.

Video loop “Other Functions” depicts the print facility at the French Central Bank in Chamalières. Constructed from found and re-edited footage taken from various sources, the work portrays part of the production process of the Euro, yet it is the same machines and the same crew who print the CFA Franc. From the mixing of the white cotton pulp, control checks, the buttons pressed, the team of the French Central bank navigates the production of the currency.

Landscape of Eurafrica
The central feature of the exhibition is the rich visuality and aesthetics of the CFA Franc banknotes. The new video “The Cut, The Press, The Punch'' proposes a new practice of visual decoding of the banknotes, drawing attention to their material history, process of production and political manifestations.

The video is constructed as a visual journey across the surface of CFA Francs and includes fragments of more than 40 banknotes designed between 1945 and 2003. The camera zooms in on the patterns engraved into the banknotes and depicts an abstraction of uranium mines, the oil drilling industry, coffee farming, the timber industry.

“In these lines, in these cuts, in all of this pressure of the printing press we find very abstract but at the same time very concrete scenes. Eurafrica can’t be an official narrative any longer but we can speculate on whether the lines of the cartography of Eurafrica are here, in the landscape of these banknotes. We find Eurafrican colonial ideology continuously pressed onto this paper, we see an ongoing production line of colonial ideology. A territory that has been cut up, cut open, excavated, being managed and produced into these series of banknotes. They are everywhere but we don’t really look at them, although they carry the weight of these economic institutions and represent the entire power structure. Now many of the states in the CFA zone are in serious discussions to form their own currency union ‘the Eco’, and it is incredibly important that Europe doesn’t hinder that again”, - says Nina Støttrup Larsen about her work.

There are a number of additional elements that form the exhibition installation including the carpet, curtain and painted wall, which refers to the similarity in recent design, production and economic relations between the Franc CFA and Euro. The dusty green color of the curtains resembles the 5 Eur banknote and 5000 CFA. The blue color of the carpet and the wall was obtained from the color range of 20 Eur and 1000 CFA. The particular shape of the carpet recalls the engraver’s cuts to create lines for the motifs on CFA banknotes.

Image: An enlarged page from the ‘Atlas of Europe’ of 1942 with a cartographic representation of Eurafrica

About the artist and curator:

Nina Støttrup Larsen uses artistic strategies and long term research as a tool to plot out global structures of power in relation to economy, legal infrastructures, geopolitics, and the (post–)colonial present. Working with documents, data, texts and video, the works materialise in different editions of installations, performances and publications. Nina was a fellow of the Jan van Eyck Academy (NL), Academie Schloss Solitude (DE) and a resident of the Cité Internationale des Arts (FR). She has worked with news magazine De Groene Amsterdammer, and taken part in various art festivals in Dakar (SN), Port au Prince (HA), Saint Denis (La Reunion, FR). Her installation 'Mercurial Relations' about colonial currency, the West African CFA franc and its manipulation by the French treasury and the European Central Bank was a part of the last Bergen Assembly (2019).

Anna Bitkina is a curator of visual contemporary art, performative projects and educational programs. In her curatorial practice she connects theory, social science, history and philosophy in order to generate knowledge about contemporary reality and its socio-political conditions. In her projects (often durational) she explores the territory of art and contemporary curating to tackle the emergent political and ecological challenges in the time of accelerated capitalism, technological pervasiveness and a sharp rise of complexity. Anna is a co-founder of TOK, a curatorial collective and a research-based art organization founded together with Maria Veits in 2010. In 2020 TOK was the winner of the apexart Open Call 2020-2021 (exhibition ‘Voicing the Silence’ to be presented in Moscow at CCA Fabrica in summer 2021). In the fall 2021 TOK will curate the main exhibition at the 6th edition of the Photomonth Biennale in Tallinn.